Sometimes projects take a lot longer than expected to get to release. After several design changes, lots of simulations, and plenty of mounting revisions, we are happy to announce the release the CorkSport Oil Catch Can for Mazda and Mazdaspeed vehicles. 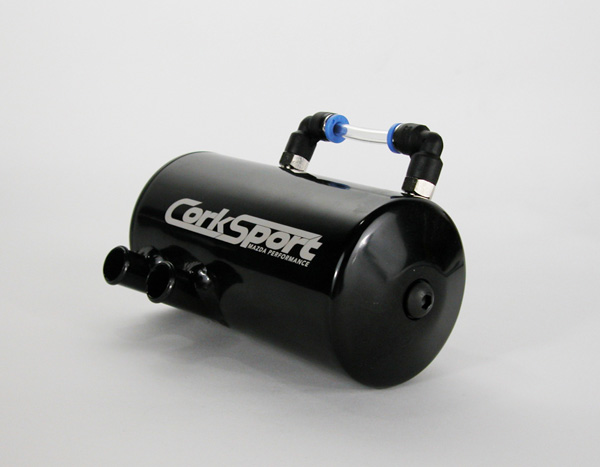 Many of you have followed the development as we moved through our design revisions beginning with our first concept, a titanium oil catch can that used stainless steel wool to separate out the oil and several versions in-between before we came to the design that we are happy to be releasing today. 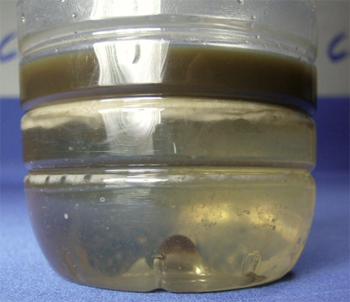 We were particularly surprised to see how much water vapor builds up in the crank case of these cars. After a few miles of driving with the catch can on our shop Mazdaspeed 3, we could really see what separates our catch can from the competition. After only 500 miles we had separated out a great deal of contaminants from the PCV system. Most of which was water vapor that had been trapped in the PCV lines and engine block. This alone should ensure that oil doesn’t break down quickly on our DISI MZR engine.

After 3000 miles we performed our first oil change. The results were exactly what we expected, a much smaller concentration of water but a noticeable amount of oil. MZR engines are notorious for slight amounts of blow by getting back into the engine.

As you can see from the picture this is something you don’t want getting back into your engine. We took this sample and sent it out for particulate analysis. The results really prove that you don’t want this in your engine. Along with a large amount of oil, which can be seen, there was metal and water present in the oil. All of which we don’t want to be reburned in our engine or stuck to the back of our valves.

Even though it took a little longer than we expected to release this, I’m sure everyone will agree that there are certain things you want done right and somethings are worth the wait. When it comes down to it there are just some contaminants that you never want entering your motor. Most of them are listed on the sheet to the right.

The CorkSport Oil Catch Can will enhance the reliability of your engine and improve performance and fuel economy. It is made from high-grade aluminum with a pressed annodized top cap and includes a chemical resistant sight tube. It comes with a complete mounting kit and can be purchased from CorkSport here.

For more information about this product or to purchase one today, please visit our product page on our online catalog at https://corksport.com