What’s in a name? I regularly have people ask things like: “Corksport, what’s that?” or “Mazda performance, what’s that mean?” and “Ok, so where did the name come from?” I usually give a quick “Mazda used to make cork back in the day” and be done with it. We got the cork part from that and the sport was just popular industry lingo at the time.

For those interested, the longer version of the story goes something like this: Two twenty-somethings, already Mazda loyalists, wanted to do more to their car then put on some custom wheels (see Modern Stars) and remove our rear bumpers (those of you who are now thirty-somethings know what I mean). The aftermarket was nearly non-existent for Mazda fans unless you had an RX-7 or Miata. The internet changed everything. We discovered an economical way to reach similar minded people. And we quickly built a catalog of every part we could find for Mazda cars. After many moons of trying to negotiate a dealer account with MazdaSpeed of Japan (MazdaSpeed was not to have a North American arm for several years) we finally broke through. We had our catalog and a working relationship with MazdaSpeed, all we needed was a name…

We were thinking Mazdasport, nope, too much like Hondasport, R&D Racing, no too cliché. So we hit the history books. It turns out Mazda has been through several name changes. In fact, Mazda wasn’t actually Mazda, it was Toyo Kogyo. OK, that made some sense, it definitely sounds Japanese! Anyways, prior to that the company was known as Toyo Cork Kogyo. This was around the time they made the transition from artificial Cork manufacturing to tiny 3-wheeled vehicles. In one form or another, Mazda has been around for 89 years.

So, as you can see, we got the Cork part of our name from there, a tribute of sorts to Mazda’s history. We added the “Sport” and we had our name. Check out our first logo below: 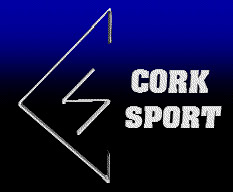 It was angular and boring, a lot like the person who designed it (me) but I’ll take credit for at least getting one done! A customer helped us settle on the existing logo in 2002.

There you have it, CS as you know it today. We’ve picked up a few bumps and bruises along the way but we’re still going strong.

“What’s in a name?” Quite a lot actually.

P.S. For those of you that want even more check out the article below:

This article was written by Alexander Palevsky and Jay Lamm.
It was published in the Aug/Sept 1998 issue of Sports Car International, Page 8.

In Japan, automobile manufacturers commonly carry the names of their founders or of the town where they were established. Though this makes perfect sense to the Japanese, these multi-word titles don’t make for a great brand identity in the Western world.
Toyo Cork Kogyo Co., Ltd., for example, doesn’t roll of the tongue as smoothly as say, Ford. But this automaker knew a better name would have to be concocted if they were ever to export their cars overseas.

The solution lay with the company’s first president, Jujiro Matsuda. In Japanese, no syllables are ever stressed and some inner syllables are virtually skipped. Thus, Matsuda is pronounced “Matsda.” To make the name fly better outside of Japan, the spelling was changed to Mazda.
Conveniently, Mazda already had meaning. Zoroaster (also called Zarathustra) formed a religion in the late 6th/early 7th centuries, rejecting the pantheistic cults of the time and instituting, in their place, a religion based on the worship of one god, Ahura Mazda (or Ormazd).

By the time Toyo Kogyo introduced their first production vehicle in 1931, (actually a 3-wheeled truck), it carried a Mazda badge. The name would continue on their first passenger car, the 1960 R360 Coupe. But the company would not be officially renamed Mazda until 1984.

Incidentally, Zoroastrianism still exists today in Iran, India, and elsewhere. No word yet on whether they’re planning to sue for trademark infringement.