Last Saturday at our CorkSport Swap Meet, we had a great turnout for the Dyno Testing. With 16 people signing up ahead of time and 5 signing up on site, we got some great runs in from a diverse group of participants. We even felt sorry for a handful of non-Mazdas and let them participate as well!

High horsepower of the day was Jason O’Neill with his ’01 Miata. Jay’s car made 393hp to the rear wheels with a brutal 368 ft lb of torque. A week earlier he had the motor out to diagnose some issues with the variable valve timing as well as try to get the head into the shop for new valve guides and seals and couldn’t make it in time so he threw it back in just to drive down to the event on a set of beefy drag radials. Later in the evening he ran an 11.51 at 124mph out at Portland International Raceway. Brutal. I’ll say this much, when a lightweight little Miata pushing 400+hp (it was uncharacteristically chilly out Saturday night) on a cold track makes a 1.6 second reaction time, it’s driver has had some practice. Hats off to Jay for his awesome car and sticky launch skills.

Close behind was an LS2 powered FD RX-7 that was unbelievably clean. The install was gorgeous, with little over 1000 miles on the clock since the swap, and the powerband was equally beautiful. Dropping an Earth shaking 300ft lb of torque at 1600RPM and following that up with a 45 degree horsepower curve topping out at 376hp, this car would be more adrenaline pumping fun than a barrel of monkeys in an AK-47 factory. And the owner’s passion for Mazdas goes way back…he bought an FD off the lot new in ’93 as well. While purists will wince at the addition of Chevy Power to one of the crown jewels of Mazda’s Rotary history, I would guess anyone who saw the meticulous install and the owners passion for making this an all around amazing car would give it a thumbs up. The drivetrain wasn’t the only amazing thing about the car – the suspension and bodywork were phenomenal as well.

We had a pair of Speed3’s and a Speed6 on the dyno as well, with high HP numbers in the high 260’s and high torque numbers in the high 290’s. The dyno runs on these cars are all over the map, preferencing torque on one run, horsepower on the next. One car ran 257HP w/ 296ft lb followed by a run of 269HP w/ 282ft lb. And I always thought the less the driver could effect the run the more consistent the output would be – not so with the MZR 2.3 DISI powered sedans.

The rest of the pool consisted of two FS Powered Mazdaspeed Protégés, a BP Turbo Powered Protégé, Four Miata’s and two eardrum scalding FB RX-7’s that both gave the LS2 a run for its money for smoothest powerband.

Whole playlist – wraps up with the RX-7 and the miata.

All in all it was a great day, and we had some good opportunities to talk shop and discuss opportunities for more power. The Seattle area group from MazdasNW.com came down and were able to meet up with more of the folks on the forum who are from the Portland Area. All in all, it became clear that a lot of these Mazda enthusiasts are hungry for opportunities to spend time discussing their wrenching projects and spending time with like minded people. I look forward to future opportunities like this. Thanks again for everyone who came out to the event…without such great participation, none of us would have had as much fun as we did.

P.S. If you have video of your car on our Dyno during the CorkSport Dyno Day and it’s not included in the above video playlist, fire over a copy for me and we’ll add it! Sorry for not getting all of the cars on video, I had a few different hats I was wearing and wasn’t able to get them all.

We attended Sevenstock XII down in sunny Irvine, California on September 26th for a fun day of Mazda rotary-powered goodness. The event was held at Mazda’s headquarters which has plenty of parking and provides a great backdrop for the biggest rotary event in the world. As you can see below, when we arrived we were greeted with a reminder of what Mazda is all about.

There was plenty of Mazda’s favorite catch phrase on display at the event. Row after row of rotary powered vehicles were in the parking lot, and the enthusiasts who drove them there could be found wandering around taking it all in. The people in charge told us that there were more cars at this year’s event than there had been at any previous Sevenstock. 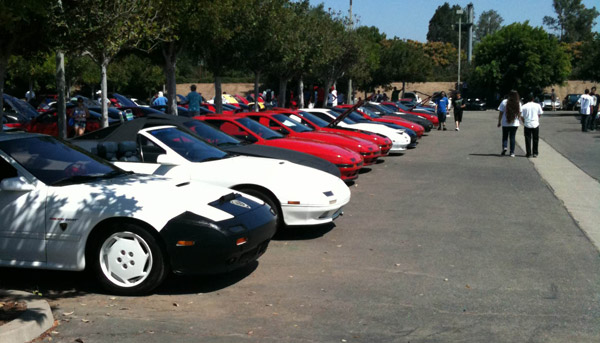 Sevenstock always has people who had travel long distance to reach the show, but this year we saw some people who travelled especially far. RE-Amemiya and Knightsports flew in from Japan to get more acquainted with US rotary fans, and hopefully spread the word about their parts. We drove 1000 miles to setup a booth at the event and show off some of CorkSport’s new parts for rotary vehicles. A lucky RX-8 owner won the newly released CorkSport RX-8 Racepipe we donated to the Sevenstock raffle.

There were some really outstanding cars at the event. I particularly liked the white FD below with the 99 spec front end conversion installed. The car even had a rare Mazdaspeed vented hood. 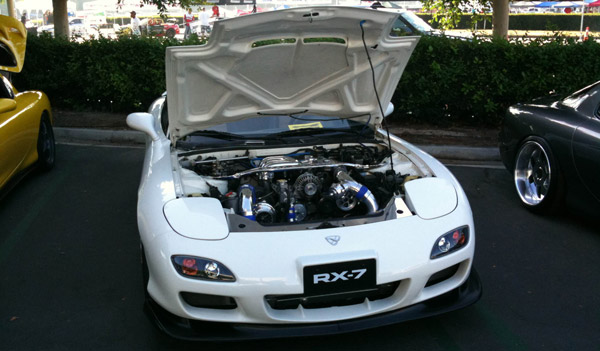 In my opinion, the best sounding engine at the event was a 4-rotor in the time attack RX-8. The best way to describe a 4 rotor engine sound to someone who has not heard one is that it’s like an F1 engine only better. The motor has wicked fast throttle response and took maybe a second to redline while free revving. 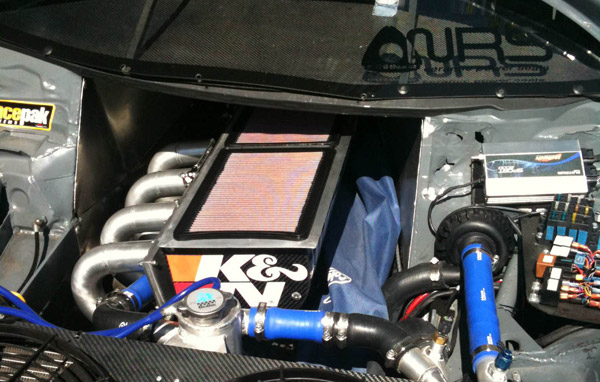 It was great getting to talk to everyone at the event and chatting with customers about their cars. I look forward to next year’s event to see great cars and great people again. If you have the means, please stop by our booth at any of the shows we attend!

So when did you know you first wanted a Mazda?  I had my high school years skewered a bit by friends and other influences down the trail of Mazda ownership.  The first Mazda I really wanted was a 323 GTX.  Getting a ride to school in rain, snow, or any weather made me realize how unique the car was.  It didn’t help that the dual rear hatch wings and the decals down the side listing off the traits of a performance car “Full Time 4wd 16 Valve DOHC Turbo”.  I do remember seeing the 88 anniversary edition Rx7s in white thinking they were cool but it didn’t have the pull the 323 GTX did. 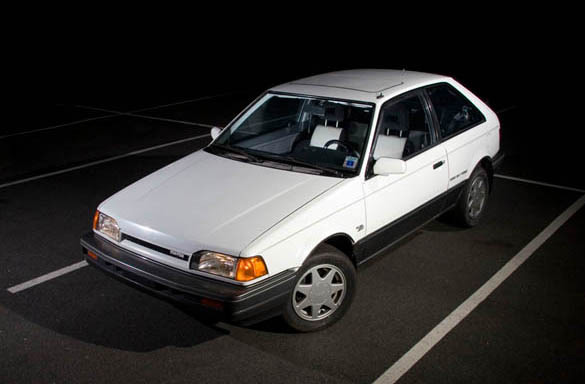 It took 6 years before I got a chance to purchase a 323 GTX.  I found one in the back of an auto week magazine located in New Mexico.  The car was a 1988 model with no rust and had 132,000 miles on it.  After several phone calls and a generous loan from a friend I flew to New Mexico with a cashiers check for $3750 in my hand. I met the owner the airport in Albuquerque after spending a day in airports with short trips in the air at 3pm.  I drove the car to a nearby restaurant and took a look over the car.  It was a relatively stock car with the rear muffler removed for a bit more power and noise.  The interior was in good shape with no damage.  So we made the deal and I headed on my way back home to Washington State.

This being my first turbo car I did do some reading up on it.  I knew to let the car idle after driving hard for a period of time and to not stand on the gas until the car warmed up.  I had heard term turbo lag but never experienced it before.  About 3 minutes into driving the car to the freeway in Albuquerque I pulled out in between some cars to get onto the freeway.  Standing on the throttle at 1300 rpm and the car didn’t move to fast.  This whole experience stuck with me because of the large truck I had pulled out in front of that had to slow down because some fruit loop in a Mazda pulled out in front of him.  Thankfully my first run in with turbo lag ended with the car or the driver being unhurt.

The drive back to Washington was un-eventful.  The car was solid as could be and I averaged 24 miles per gallon driving through the night in Arizona and So cal to my first stop to rest.  After a night sleep I drove home the rest of the way and arrived in time for work on Monday morning.

My co-workers were pretty amused at the purchase I made.  I heard “you flew to New Mexico to get that?”  Apparently they did not have a good appreciation for fine automobiles that I did (ha-ha).

Skip ahead 4 years and the car had needs some love.   New turbocharger was installed on the car along with a refreshed cylinder head.  That was too much for the poor bottom end of the motor.  At 187,000 miles the piston rings had enough and I looked like the car James Bond with the smokescreen going full blast behind the car.  So at a crossroads of sorts I found myself wondering where to go with the car.  I had read up and seen the 90-94 323 turbo models from Japan and other markets.  Spending some time looking around I located an engine supplier who had a BPT turbo engine in stock.  After a week I had an engine sitting at home.  It took a few weeks to get the installation sorted out with the changes between the engines but I was back on the road with the BPT running on the B6T hardware. 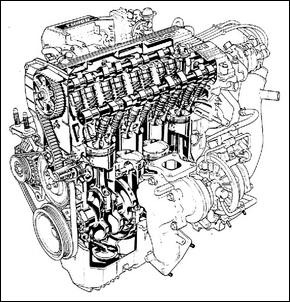 One thing that was nice was the BPT made a lot more torque than the B6T engine.  It only took a year until the transmission let me know it did not care for the extra torque.  I had to get across the street quickly between the flows of cars in downtown Portland.  Going across the rutted street cost me the transmission.  One of the tires left the ground for a second. When it came down BANG went the planetary assembly.  I limped the car home knowing there probably wasn’t much hope for the transmission at that point.  I decided then to use the transmission that arrived with the BPT engine.

The story does continue from here, but we’ll save that for the next entry…