That’s right, it’s time to start making more power on the SkyActiv 2.5T. We are proud to introduce the CorkSport Power Series Short Ram Intake for 2018+ Mazda 6 equipped with the 2.5 Turbo Engine and 2016+ Mazda CX-9 . We replaced the restrictive factory airbox with a free-flowing intake system that was designed to help your turbo breathe significantly better. The SRI offers better performance, sound, and looks in an easy to install package. Read on for full details, and be sure not to miss the sound clips in the video below!

This CorkSport Short Ram Intake was designed specifically to get the best the 2018+ Mazda 6 2.5T and 2016+ Mazda CX9 has to offer. From the precision machined MAF housing to the high flowing filter, each component in the CS system offers an improvement over the stock counterpart while retaining great fit and finish. All mounting hardware, brackets, and clamps are included to make your install quick and painless.

Starting at the OEM turbo inlet pipe, the factory airbox utilizes a ribbed and flexible rubber elbow. While working well enough, the ribs induce significant turbulence into the intake tract. The CorkSport intake replaces this elbow with a smooth flowing silicone elbow. In addition, the silicone is 4-ply reinforced with nylon to eliminate any chance for volume reduction under wide open throttle.

Next comes the MAF sensor housing. The MAF sensor essentially reads the volume air that is entering the engine so the ECU can adjust tuning to suit. Since the OEM unit does a good job here, it was imperative that the CS MAF housing matches to ensure no check engine lights or tuning issues. The CorkSport MAF housing is precision machined from 6061-T6 billet aluminum to match the OEM housing to ensure no CELs, no tuning issues, and great flow.

Finally, the CS SRI uses a performance AEM dry-flow filter. A high-quality filter like this is long-lasting, reliable, and can be washed and reused. It has superior filtration to the OEM filter, while also allowing more airflow into the intake tract.

Now for what you’re all really interested in: power gains. By removing the restrictive OEM airbox and turbulent intake elbow, we were able to pick up 8-12WHP from ~4000RPM out to redline. This power bump comes with no tuning changes and with identical testing conditions. Check out the dyno graph below to see for yourself! Note: the variance in low RPM (2800 and lower) is due to difficulties associated with dyno testing an automatic vehicle.

Freeing up a few extra ponies is great but what you will really notice is the added engine and turbocharger noise. That restrictive airbox does a little bit too good of a job at dampening out all the fun sounds that come with a turbo. We were honestly a little surprised by the flutters, whooshes, and psshh noises that come with the CorkSport SRI. You also gain a little extra engine induction noise under hard acceleration. The extra noise is enough to be fun when you want it but not annoying or distracting when you don’t. Watch the video below to see what it sounds like.

As with most CorkSport products, this SRI kit comes with all the clamps, hardware, and even a support bracket for the MAF housing to ensure you have an easy and quick install.

The CorkSport SRI for 2018+ MZ6 2.5T & 2016+ CX-9is a great modification whether it’s your first or the just the latest on a long list of builds. It provides a noticeable power gain, adds some extra fun to your ride, and will support future mods down the road. Pick up yours today!

Be sure to contact us with any questions you may have, we will be happy to help!

Time to bring some CS love to those who need some more space than what a hot hatch can offer. Introducing the CorkSport Power Series Cat-Back Exhaust for 2016+ Mazda CX-9 AWD.

The CX-9 has great potential with its turbocharged 2.5L engine but it is bottlenecked by the small stock exhaust. The CorkSport catback ups the exhaust diameter to 80mm (from the OE 60mm) and utilizes high flow pass-through resonators to really help that turbo breathe better.

To go with the better performance, the CorkSport cat-back also looks great. Made from CNC bent, fully polished, T-304 stainless steel, it’s definitely an attention grabber that will stay looking great for years to come. The dual exhaust tips were upgraded to 100mm outer diameter and extended to really fill out the bumper cutouts. Don’t worry though; the tips are noticeable without being obnoxious and detracting from the clean look of Mazda’s Kodo design philosophy.

Last but certainly not least: the sound. The upgraded piping diameter and less restrictive resonators combine to create a sound that is certainly louder and more pleasant than stock without being unbearable for the daily commute. You hear the exhaust when you want to but it quiets down while cruising and does not drone. As a final bonus, you get a little taste of turbo noise as it spools up. Check out the video down below to hear a comparison between the CS CX9 cat-back and the OE exhaust for yourself.

All of these benefits come with the same CorkSport quality and customer service that you all have grown accustomed to. This means OE style fitment that retains all existing exhaust hangers and oxygen sensors since no one likes a check engine light.

Whether you have moved on from a Mazdaspeed but miss the sound or just want to spice up your grocery getter with a little extra noise, the CorkSport Mazda CX-9 cat back is an upgrade that hits all the right notes. Check out the product listing for full details.

Want more for your CX-9? There may be a few more things coming down the pipeline, but submitting a product idea helps us to know what you’re looking for!

Sometimes it’s the simplest changes to a vehicle that can really make a difference.  A crisp and well-lit interior makes for a surprising improvement. CorkSport is proud to announce that we now have LED kits for 2016+ Mazda CX-3 and 2016+ Mazda CX-9.

The CorkSport LED Light Kit replaces all interior and some exterior lights that are normally yellow incandescent bulbs.  All CorkSport LEDs are the 7000k color for a pleasant, but bright and clear illumination.

Check out a comparison of the CorkSport LEDs vs the standard incandescent bulb.

Sure, you can probably find some random lower-quality LEDs online, but only at CorkSport will you get a complete kit with exactly the bulbs you need along with color installation instructions, a CorkSport tin and top notch customer service.

Recent news has been circulating about the new Mazda and Toyota joint production plant and what will be built there.  In a few news articles, Masamichi Kogai has been quoted saying Mazda will introduce a new and different type of CUV (crossover utility vehicle).

I have been thinking about that statement about a new and different type SUV. Looking in the marketplace, you have pretty much everything out there in size, shape, and quality.  I think there is something which is getting lost in the translation of this message.

My bet is it will be something totally new for Mazda.

Back in 2015, Mazda showed off the Koeru concept which was hinting to future models of crossover SUVs.

Looking at the current styling and the concept cars Mazda has laid out at the Tokyo Auto Show with the Mazda 3 Kai concept this year.

The front end styling has been sharpened on this concept car, but it isn’t too far outside of what Mazda is currently offering. The changed roofline at the rear points is designed to maximize cargo space, but in a good-looking package.

I will go out on a limb and guess that Mazda is probably working on a new motor to power whatever the upcoming CUV is going to be.

The most powerful motor Mazda offers right now is the 2.5 Skyactiv turbo engine, which powers the Cx-9 and soon to be offered in the Mazda 6. This motor is based on the older Skyactiv tech though, and with Masamichi saying the new vehicle will something new, my guess is that we should expect to see another tech marvel being produced.

The last thought I have on this with Mazda is this:

If they’re coming out with something new, we may see a large-sized vehicle to go up against the truck-based SUVs from other manufacturers. It is a direction Mazda has not gone before and lines up with the statements they are giving us.

The CX-9 is not exactly the model you think of when it comes to a mod car. As a matter of fact, CorkSport doesn’t even list the CX-9 in our catalog, but for those of you thinking about starting a family or carting your brood to soccer games on Saturday, this may be just the vehicle for you!

The new 2014 Mazda CX-9 was unveiled this week ahead of its Australian debut and I figured it was worth a mention, even if it is just to see how the KODO design is being incorporated into the product line. 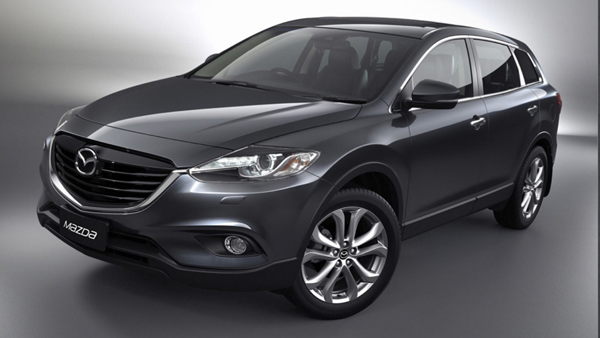 Replacing the Nagare design language with the new sportier KODO design has done the front of the vehicle some good. The grille is much improved with more aerodynamic headlights and fog light housings, along with some sportier LED daytime running lights, but the front overhang detracts from the sportiness and likely the handling of the vehicle. They have not given us a view of the back or interior yet so some of the design elements in the new version remain a mystery. 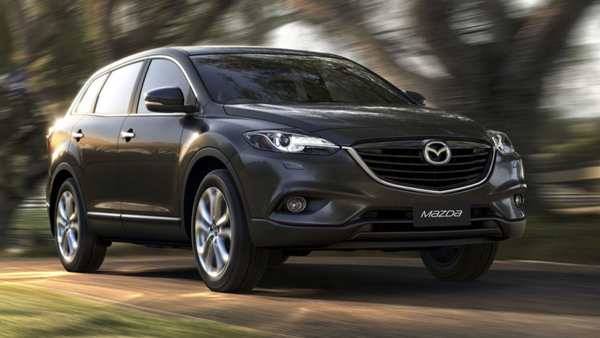 The word is that the SUV will be carrying over the same Ford-based CD3 platform and keeping the 3.7 liter V-6, 273 horsepower engine and six-speed automatic transmission. It will be interesting to see how Mazda intends to incorporate SkyActiv technology into CX-5’s older and bigger brother in the coming years, but for now, the family-friendly seven seater will continue to get just 19 mpg in combined EPA fuel economy.

Now Mazda, what we really want is any details on a new Mazdaspeed!

Wipe That Smile off Your Face CX-9! September 18th, 2012CorkSport