That’s right folks, Mazda is going to release a new twin turbo model and it is going to be used in none other than: a diesel Mazda 3!

Before everyone heads out to get the ropes to hang me for luring you into this blog post with the promise of twin turbos, let me explain. Mazda has been working to lower emissions while improving the performance of their motors for both gas and diesel. One such way Mazda has found is to run a really small turbo and a larger turbo in tandem to keep the performance linear in the diesel engines.

Mazda has been down this path before back in the late 80’s and early 90’s with two versions of the rotary engine, the 13B –RE used in the Eunos Cosmo and the 13B-REW used in the FD RX-7. Both 13B engines used a pair of turbos, a primary turbo that would spool until the RPM reached the switch-over point when the secondary turbo would come online to generate an ideal turbo response and wide enough power band for the car. This same feature will be applied with the diesel engine giving you a wider power band to drive with. 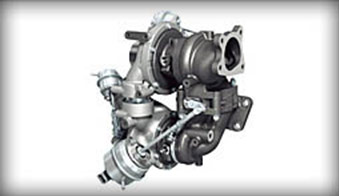 Mazda has also lowered the compression of the diesel engine allowing the combustion to be more complete and putting less stress on the engine parts. This gives Mazda the ability to use lighter weight smaller parts to gain efficiency and provide better emissions.

The really trick feature Mazda has put on the diesel engine is variable valve timing. This allows the exhaust valves to open slightly after the initial startup to let exhaust gas into the combustion chamber on the intake stroke. The exhaust gas then warms the combustion chamber to help the engine get to operating temperature more quickly thereby reducing the chance of engine misfire.

Mazda has stated that the engine has 20% better fuel economy over the outgoing MZR-CD diesel engines putting it at 48 MPG (the MZR-CD engine gets 40 MPG).

Now the big question is would I own a new Mazda with the new Sky-D engine? With all of the work Mazda has put into the new engine, I look forward to trying one out and will wait to pass judgment.