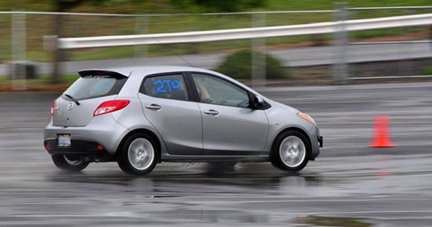 We have put some miles on the Mazda 2 over the last month and a half. We are approaching the 2000 mile mark. At this point the engine is well broken in and up to the challenge of some performance driving.

I had a chance to Autocross the Mazda 2 on Sept 18th at a local SCCA event held at Portland International Raceway. I signed up the car for time only runs to see how it would do. If the Mazda 2 was to be in a specific class it would be ST class according to the SCCA rules with the current modifications. This would pit me up against Mazda 3s, Honda Civics, Mini Coopers (non S models), etc.

The course that was laid out was tight and technical with not many sections to build up speed. The weather decided to liberally apply water to the course making setting record speeds pretty tough. After taking my turn working on the course and watching other cars maneuver through it was my turn to give a go. I do have experience driving around cones racing rally cross so I am not a total novice. This also means I had expectations of what the 2 would do on the auto cross course.

For the first run I left the DSC (dynamic stability control) turned on. I wanted to see how much affect it would have at a maximum drive. The first few corners went well and I could not feel the DSC engage at any point. When I hit the first short slalom I felt the car try to rein in my driving. A quick back and forth transition around the 3rd cone combined with me applying the brakes to get the car to unload the rear tires to make a quick right hand turn got the DSC light to kick on. I could tell the car closed the throttle and killed some of the power because it took a second to get my momentum back up for a “Chicago Box”. 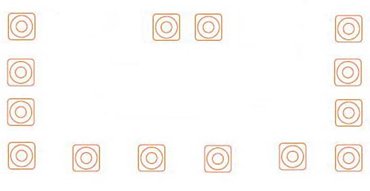 Overhead view of cones as a “Chicago Box”

With the Mazda 2 the Chicago box was a breeze, just drive in and out with just steady speed and quick steering inputs. After the Chicago box there were a few more corners and into another slalom which once again the DSC came back half way through it. What is happening is the cone side front tire is unloading enough for the wheel to slip and it triggers the DSC. After the end of the slalom there was a tight left hand corner which transitioned to a longer sweeping corner. This corner trigger the DSC as the car wanted to under steer to the outside. I was off and on the throttle trying to get the car to rotate and get back in tighter to the apex of the corner. With the DSC turned on the throttle inputs did not help. The final section of the course was a short straight which did a 180 turn to the left and the end of the course with the timing lights. To make the corner with the Mazda 2 I opted for the e-brake approach. It worked ok but I was caught in 2nd gear so I didn’t have enough power to quickly get across the finish line after the turn. I netted a 52.68 for a time on the run which was ok for the really wet course.

The second run I ramped it up a bit. I took the DSC off and pushed the car as hard as I could. I discovered several things on the second run.

#1: The car will really under steer if pushed hard in the wet. I tried off and on throttle, left foot braking, Finnish flicks, you name it to get the 2 to rotate with no really sure fire method that worked.

#2: You can get rubber on the 1st to 2nd gear change with the DSC off. There were two spots where I had to get into second gear due to bouncing off the rev limiter and both of them occurred just before the slalom sections.

#3: With the DSC off, you can get the ABS to engage quite often. I had the ABS turn on several times with hard braking and turning which would unload a rear tire. With the brakes applied and weight transfer it was enough to cause the rear tire to lock up and trigger the ABS.

#4: Using the E-brake on the last corner only works so-so. When you get the back of the 2 swung around and get back on the throttle the car will under steer pushing you really wide. This resulted in some extra time getting the car lined up with the timing lights at the end of the run.

#5: You can use the E-brake to get the car to really slide sideways. Unfortunately the under steer takes affect after a few seconds and ruins the fun but not before you can get some great pictures. 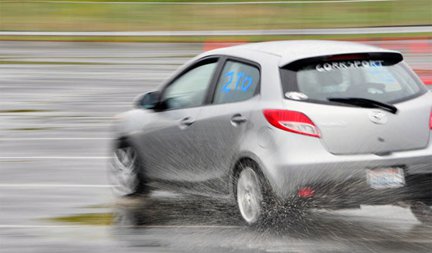 The second run netted me a 51.86 second time but I hit some cones in the process. The third run I picked up a passenger to take along. I could tell the extra ballast was in the car. The run was slower despite not hitting any cones. If you are going to race a Mazda 2 in Autocross make sure you leave the passengers out until the scoring runs are done. My 3rd run was 53.03 seconds.

I got a chance to try out several different techniques for the three extra runs which had mixed results. The big handling obstacle to overcome is the under steer in the Mazda 2. We have a solution in the works so check back for updates.

So how did I do compared to the other cars which I would be classed against in ST? There was a Mazda 3 hatch which was running at the same time which posted times of 53.96, 54.43, and 53.59 seconds. A Mazdaspeed 3 running at the same time posted times of 55.07, 53.18, and 52.94 seconds. The Mazdaspeed 3 would be in a different class due to the power modifications but you can see the 2 would be competitive against it. If you compare the times against the more powerful cars you can see the Mazda 2 would do well. I want to try out the Mazda 2 on high speed auto cross courses to see if I would have the same success against the same cars.

Overall I really enjoyed running the Mazda 2 in the auto cross. It handled better than I expected with my driving style and proved to be very predictable.

I would like to give a thank you to Ceejay for the pictures I used in the blog. He stood out in the rain shooting pictures while I and the other MazdasNW people drove around the cones during the afternoon.