Mazda has developed a system for the DISI direct injected engine which allows the engine to turn off when you come to a stop. When you push the throttle again the vehicle starts back up smoothly and you continue on your way. Why is this important you ask? The biggest reason is the fuel savings. In city driving it seems (and feels to me) like you spend more time at stop lights than actually moving. While sitting at the stop light your car is running and burning fuel. Mazda decided to do something, and make the car not run while stopped to save fuel. Mazda says the i-stop system can improve fuel economy by as much as 10%.

The picture below is from Mazda’s webpage and it shows the i-stop system and how it functions. 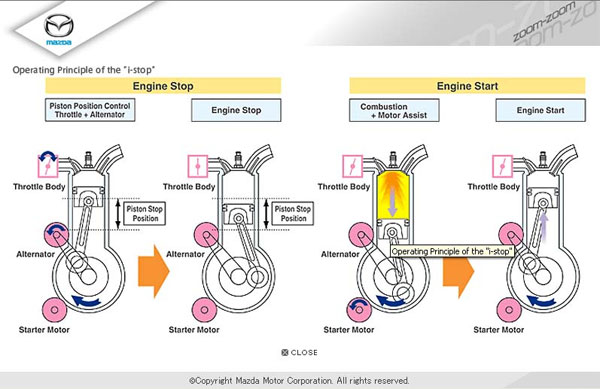 When you come to a stop the car turns off at a precise point, this allows the i-stop to turn back on smoothly. Because the motor is direct injected the system is able to restart in .35 seconds when you touch the throttle to move again. Mazda says this is half the time that conventional electric motor systems take. In reality, .35 seconds would be pretty tough to notice when you hit the throttle in your car.

You can gain up to 10% better fuel economy with a system that is invisible to the driver, what’s not to like? The 10% fuel savings is made during the Japanese government drive tests to rate fuel economy. The Japanese testing is different from how the US EPA does fuel testing, which results in a .25 mile per gallon increase with the i-stop system in place. Mazda has been discussing this with the EPA, and trying to get the testing changed but so far nothing has come out of it. With the gains not showing up with EPA testing Mazda is not sure if they will be offering the i-stop system in the North America. The extra cost and not being able to market the improvement is the biggest factor, because the US EPA testing does not allow for accurate estimations of gains. Cross your fingers the EPA will be willing to adjust their methods or we will get left out from one of Mazda’s good ideas.

I am hoping the system is available when the Mazda 2 arrives this summer. You could get a decent 40+ MPG car that you wound not be ashamed to drive every day.