Mazda recently announced a new groundbreaking system called i-ELOOP that they are claiming as the first regenerative braking system that uses a capacitor. Mazda will be introducing this new technology into their 2012 models, which they say will improve fuel economy by 10%.

Mazda says that the odd name is an adaptation of “Intelligent Energy Loop” and represents the company’s intention to efficiently cycle energy in an intelligent way.The i-ELOOP will use a capacitor which is an electrical component that stores large volumes of electricity in place of a battery to convert the vehicles kinetic energy into electricity when the vehicle decelerates. The energy it produces will be used to power the climate control, audio system and other electrical components of the car. 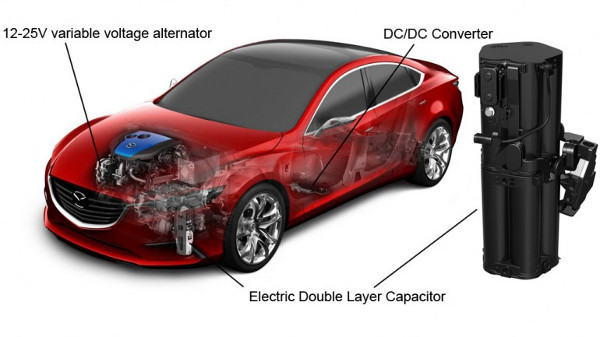 This type of system is already used in EV technology, with the difference being that regenerative braking systems in electric vehicles use an electric motor and dedicated battery to operate. Mazda avoids the need for this by featuring a new 12-25V variable voltage alternator, a low-resistance electric double layer capacitor and a DC/DC converter.

In their press release, Mazda said “The variable voltage alternator generates electricity at up to 25V for maximum efficiency before sending it to the Electric Double Layer Capacitor (EDLC) for storage. The capacitor, which has been specially developed for use in a vehicle, can be fully charged in seconds. The DC/DC converter steps down the electricity from 25V to 12V before it is distributed directly to the vehicle’s electrical components. The system also charges the vehicle battery as necessary. “

Mazda has yet to name the production model that will feature i-ELOOP but it has been designed to work in harmony with the new SkyActiv engine and transmission technologies that are currently rolling off the production line in the new 2012 Mazda 3’s.

Mazda continues to amaze by combining new technologies with traditional concepts in order to improve fuel efficiency for its vehicles without sacrificing performance.