Continuing from the last blog post about my Mazda odyssey:

I was mentioning my impending transmission swap after I had destroyed the B6T AWD transmission, there where a few more bugs with the transmission swap and I worked them out over the next couple of weeks. The first time I took the 323 around a corner at high speed the car tried to trade ends. A quick counter steer and full throttle put the car into a very manageable slide. This is the way the car should have been delivered I remember thinking as I straightened the car out before the next corner. The 90-94 AWD transmission was setup to put more of the percentage of power to the rear wheels vs. the fronts.

I picked up some second hand Silverstone rally tires from the Tabor Rally Team to mount on an extra set of rims and try my luck at rally cross. The one thing you don’t expect to hear on an AWD car is “I didn’t have enough grip”. The combination of a small turbo which made instant boost which translates into instant torque and a 2600lb car made for lots of wheel spin even with rally tires. 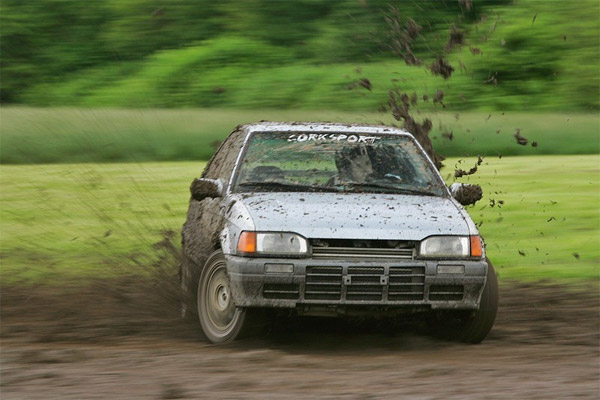 As you can see in the picture above, the results were great! I think I exported about 60 lbs of dirt from the Hillsboro fairgrounds back home to Vancouver, WA after that event. It took forever to get the dirt and grass off the bottom of the car. I didn’t exactly set any record times driving that way but after a season of racing it was good enough for 3rd place in open class with the Oregon Rally Group.

There was another rally cross event which sticks with me due to the strange nature of the event. I showed up to the event with some shaved Toyo T1S tires on the 323. I didn’t have a chance to mount the rally wheels for the event. It was a good thing to, as the water truck was a no show. That meant no water to keep the dust down and make the course a muddy mess. My run group was in the afternoon so I got to watch the cars run in the first half of the day. After a while you could see black on the dirt from tires leaving rubber on the course. This was advantage for me with my Toyo tires. My first run out was one of the fastest on the dry grass/hard pack dirt and I placed fairly high overall for the day.

Special Thanks to Wayne Flynn at pdxsports.com for the great picture above

Around that time I was thinking, you know I could always use more power. So trying out different combos of parts like ECUs and air flow meters I finally settled on running an odd mix of parts. To get rid of the factory airflow meter I went with an HKS F-CON Pro unit that was not made for the 323GTX. This setup uses a pressure sensor connected directly to the intake manifold. It allows the removal the clunky air flow meter and allows you to run vent to atmosphere bypass valves. It also allows you to use a standard BP turbo ECU to run the other basic functions for the engine. A set of 550cc injectors are used with the system for when I decide to get something different for a turbocharger or I decide to go crazy with the power.

I was happy with the 323 until I ran across a set of Advan RC rally rims for sale in Japan. After several months waiting of them at arrive from Japan they showed up at my door. The bolt pattern was supposed to be 5×114.3 which was great. A set of Familia GTR 5 bolt hubs and brakes would do the trick for installation. It turns out the wheels I had received were 5×100 Subaru wheels. In the end this may have been for the better, Familia GTR 5 bolt knuckles and brakes are heavy. After weighing the units they are almost double the weight of the 4 bolt AWD knuckles. For a car that will see rally cross more often than high speed track events light weight rotating assemblies really make a difference. So what am I doing with a fancy set of seemingly useless Advan wheels now? I don’t let too many things get in my way that I want in regards to the 323. I have chased down a set of second hand hubs and I am going to drill them to 5×100 along with a set of rotors. I get to have my wheels and keep the lighter brakes. 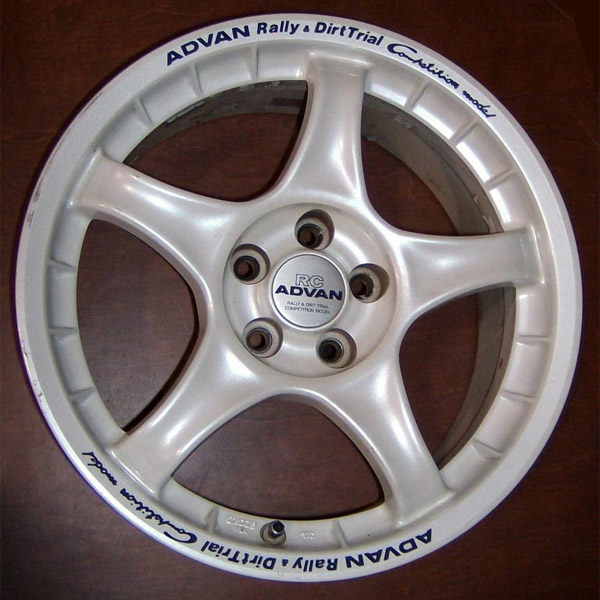 This sums up my odyssey with my 323GTX. One thing that has remained constant through all of this is the BF chassis 323 shell. My car is now mid-way through the 200,000 mile mark. It has been in a few accidents, parked in a ditch by someone who didn’t know how to drive an AWD car, rally crossed, taken out on track days, drifted into curbs, and loved like a 323GTX should be.