CorkSport likes to be in the know on what Mazda is up to so I spend a good deal of time keeping in touch with my contacts at Mazda headquarters and searching the internet for clues on what Mazda is developing. I recently ran across a fascinating bit of information looking up patent applications with the US patent and trademark office that gives us a very interesting clue as to what Mazda may have in store for us in the future.

Mazda had a patent approved on January 12, 2010 for a forced induction engine with two sources of boost. The patent refers to an electric driven compressor (electric supercharger) which disengages when the engine reaches a pre-determined mid-range RPM point at which point the engine switches over to an exhaust driven compressor (a turbo charger).

This could be really handy for a small displacement engine when you want to get a large amount of power. The electric supercharger gives the engine the necessary boost to get the mid-range where the engine can then develop enough exhaust flow to spin the turbocharger. 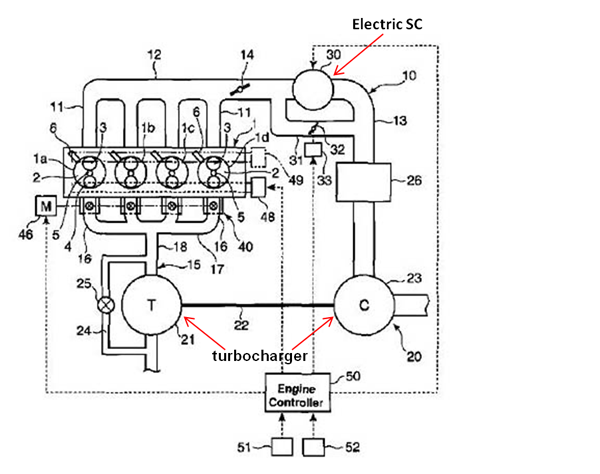 This is the same theory used for a twin turbo charged engine but with instant boost from the electric supercharger. It can give a small displacement engine a decent torque improvement and the turbocharger will add the benefit of top-end power.

The whole idea gets even better with a variable vane turbine that would adjust to the engine speed. The faster the engine speed the more exhaust volume, allowing you to get the most out of the turbocharger efficiency.

This whole patent has the fingerprints of 2015 Mazdaspeed 3 written all over it if you ask me. You would still be getting the smaller, eco-friendly, SkyActiv engine but when you put your foot on it there is a big turbocharger lurking to give you gobs of torque just like the current Mazdaspeed 3.

I will give a word of warning though, not all things which have patents ever see the light of day, but the fact that Mazda spent the time and effort to patent this idea with the US patent office, gives me hope we will see a version of this patent in the next 3-4 years.

9 Replies to “More Turbos from Mazda”