Before going into the data let’s look at the obvious differences between the two kits. The ram air box has the obvious advantage of being able to draw in colder air in using the factory hood scoop. This is especially noticeable at speed as air is being forced into the air box, however the air path into the turbo inlet pipe isn’t as direct as it is with a short ram intake. This is where the short ram excels. It provides the most direct and shortest path for the air to flow from filter to the turbo inlet pipe. As we all know the path of least resistance is usually the best path, but it comes with a caveat. The short ram intake’s drawback is that it is pulling air straight from the engine bay, which in turbo cars can become quite hot. So even before looking at the flow data both of these setups have certain advantages over one another.

We tested a stock air box, the CorkSport Ram Air Box, and the CorkSport Short Ram Intake, up to the turbo inlet pipe connections to get baseline results which indicated the following: 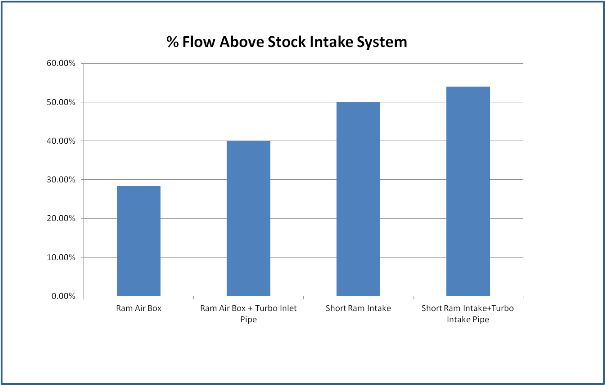 In conclusion, the SRI will provide better air volume flow, but with higher intake temperatures than the ram air box. No matter which way you decide to go with your Speed3 modification, the CorkSport FMIC kit for SRI or the CorkSport FMIC kit for Ram Air Box, will be a huge improvement over stock and either kit will provide you with more than enough power to give you a grin on your face that will match the front of your 3.