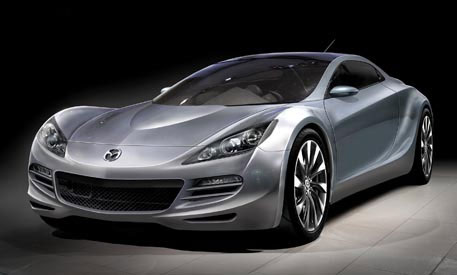 For years there have been rumors that the next RX-7 is being developed by Mazda, but thus far none of the rumors have panned out to a vehicle. Recent news reports from multiple sources indicate that the RX-7 will be built, and available as early as the 2012 model year. It will be powered by the 16X rotary engine which Mazda has had in development for the last several years but has been quiet about recently. I cannot say for sure if this time is any different than the last for the new RX-7 really going into production, so why not throw it out there? A little healthy speculation never hurt anyone.

The big question for me is what will the RX-7 look like? The picture at the top is the probably the most likely candidate. There have been lots of pictures circulating over the last few years, the most prevalent being like the few below which show multiple angles of the car.

If this is truly it, you can see some of the RX-8 styling carrying over into the new RX-7 and several of the new looks. The raised wheel arches in the front fenders are still there as is the rotor shaped bulge in the center of the hood. The bad news is that the RX-8 would most likely get cut from the lineup. With Mazda having the MX-5 available I don’t see them keeping 3 sports cars in their model range. I expect Mazda to show off a pre-production model later in 2010 when they get closer to officially announcing the car.

P.S. – There are also rumors flying around that the pictures of the black car are fakes, but the resolution it too low to get a real close up view in order to confirm or deny it.