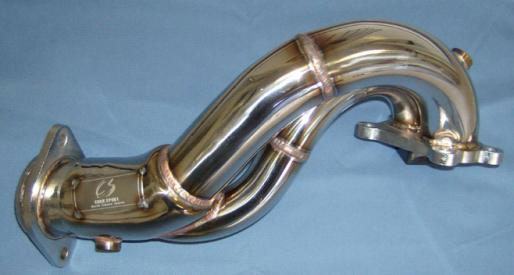 We have had some interesting times with the development of our downpipe for the 2010 Mazdaspeed3. Downpipes on the 1st Gen MS3 have historically been a bit of a puzzle to work around the dynamics of the factory computer’s expectations for what should be seen at the two oxygen sensors on the upstream and downstream side of the factory catalyst. From our research, customer feedback and experience, our designs are able to avoid throwing a check engine light on first generation DISI equipped vehicles. Other manufacturers of downpipes are hit and miss depending on the manufacturer, with some throwing the occasional random CEL for slow response time and others being more pervasive.

The 2010 model is more finicky. Initially, we faced some check engine lights resulting from the vehicle not seeing what it expected at the secondary oxygen sensor, but we made some adjustments to the O2 sensor and have thus far run our test car for ~30 warmup cycles without any sign of a CEL. The 2010 Mazdaspeed3 runs a different algorithm than the 2007-2009 models and this results in a little less tolerance to radical changes in downpipe design.

That being said, the codes we initially were getting were based on a slow response time of the O2 sensor -a code that one of our local customers was getting on his bone stock 2010. We have had our downpipe on the car for nearly three months now. We’re proceeding with caution and planning on getting a handful of downpipes out into the public on a limited release to test the waters and ensure that the design will be free of any CEL activity for all of our customers and not just the single test case of our shop 2010.

If you’ve been chomping at the bit to get ahold of our downpipe, drop Derrick an email or call us at 360-260-2675 and we’ll get one out to you. We would also be very interested in getting one of these out to someone in our local area with an otherwise stock vehicle so that we can do some before/after dyno testing. We’ve done the staged dyno on our 2010, now we’d like to do a run with the downpipe to see how well it performs on its own.