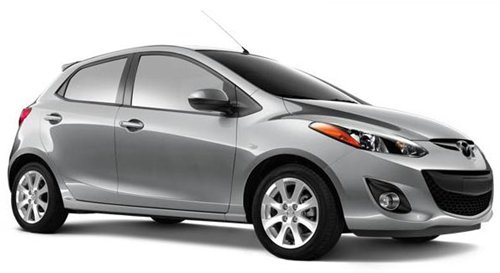 Recently I took a several hundred mile road trip in the 2. With a full load of people I was able to test out the car under a maximum capacity scenario. The car had 4 passengers and several bags in the trunk. Initially I wasn’t sure how well everything would fit into such a small car. After loading up the hatch, everything ended up fitting in just fine. If it were an overnight trip it would have been a bit cramped with the extra baggage we would have had in the hatch.

The trip we took was down the beautiful Columbia gorge to Parkdale Oregon. The trip had plenty of hills, twisty roads, and elevation to really put the Mazda 2 to the test. The twisty roads and the hills were great fun even with the loaded up car. The 2 handled great even through the large sweepers with the extra weight. The car has plenty of power still to overtake cars in the passing lanes with a down shift to 4th gear. The only time I had any moments were I wished for more power was climbing the hill outside of Hood River to Parkdale. When the altitude starts really climbing the fully loaded car could use about 10-20 more horsepower.

The 2 averaged 33 miles per gallon on the drive. This was mostly at highway speeds of 55-60 mph with the hill climbs. I consider this really good mileage considering the driving conditions. The drive from Hood River to Parkdale was in 4th gear climbing the elevation for about 20-25 minutes. I also had plenty of spots where I was gunning it coming out of corners too. I had thought the drive would have made a bigger dent in the fuel economy.

The 6 speaker stereo in the 2 sounds great and is easy to use. The Aux input jack for the factory stereo made it handy to hook up an MP3 player and keep the driving tunes going without having to load CDs. I found myself adjusting the volume knob on the stereo and not the steering wheel though. I think it is just from habit from my old car and once I get used to using it more it will be natural.

After we returned I asked the other passengers their thoughts about our 3 hour adventure in the Mazda 2. There were no complaints and there were plenty of praises for how comfortable the seats are. One other complement for the 2 was about the drink holders. Counting the spaces in the front doors you have spots for 5 bottles of water. As the driver I did not have any problems finding a comfortable driving position.

Having driven the new Mazda 2 for a month and putting 1000 miles on it I can say that the fun driving factor has not worn off. I look forward to driving the car each chance I get. I give the Mazda 2 an A+ for a road trip vehicle.