Troubleshooting problems in a car can be a daunting task for some people. I got a reminder of how interesting it can be to chase down a problem and find a solution. The situation came up recently where our project 2010 MazdaSpeed 3 had a problem with the keyless entry system. The remotes would not operate the door locks and you could not start the car normally with the push button start. You would have to hold the remote close to the start button or use the key from the remote to activate the system so the start button would work. The outside push button door locks would not work either. The whole car acted like the security system had been activated as the stereo would not work as well. 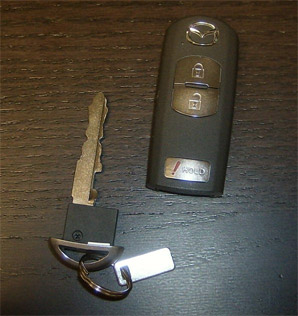 The first step I took was to check out the owner’s manual. If there is a manual or users guide to the part you have installed, or a service book for your car this can be very helpful for finding the place to start your investigation. The MazdaSpeed 3 was flashing the red light above where the key goes when the clutch was engaged. When depressing the clutch pedal in the MazdaSpeed 3 the system checks to see if a remote is in close proximity and allows the car to turn on which prompted the red light. After going through the alarm section and keyless entry areas the solution for the problem I had the only solution was to take it to the dealer according to the owner’s manual.

Not being a big fan of hauling the car to the dealer. I did a quick check through the fuses related to the keyless entry system to see if something had blown out causing the problem. I could not find a blown fuse in the system for the security system, stereo, or Bose equipment. The MazdaSpeed 3 had been jump started a week prior so my next thought was maybe the logic units for the alarm got knocked out of whack. So I disconnected the negative battery cable from the car and hit the brake likes to drain the power from the system. After a minute I got everything connected back up and gave it another try. Still nothing responded the way it should.

It was getting later into the evening at this point so I was going to give the owners manual one more shot to see if there was something I had missed. I reached up and hit the map light which I found was not working. I hit the interior manual light switch and nothing there either. When the lights did turn on it set off a memory of an experience I had in the past in my 2001 MP3. Sometimes the interior circuits like the lights are connected into other interior systems since the lights are always live. This was the case with the MP3 where the factory stereo was not working but the fuse was good. The power feed for the memory was tied into the interior lights which had blown a fuse causing the stereo to not power up. I found the section with the fuses in the MazdaSpeed 3 owner’s manual which pointed me to the fuse box in the engine bay. Sure enough the 15 amp fuse for the interior lights was blown. I popped in a new fuse and hopped back in the car. I hit the start switch and car fired up like it should with the stereo working.

“The actual cause of the fuse being blown was one of our product engineers was checking out the visor light bulbs to see if there was a part we could supply which would work in that location. The fuse for the lights was tripped during the work which was not noticed since the car was not running and it was daytime. It wasn’t until the next day when a different person tried to move the vehicle that we noticed the problem.”

Another person’s (a person implicated in the above theory) theory:

“It was related to the dead battery and jumping the car.”

No matter what caused it, in the end the problem was pretty small and it took about 30 minutes to figure out. Remember if something electrical isn’t working, check those fuses.

One Reply to “Troubleshooting”