Around this time last year I reported on people racing Mazdas around the planet, and wanted revisit the topic and give everyone an update on some of the cool things Mazdas are doing. 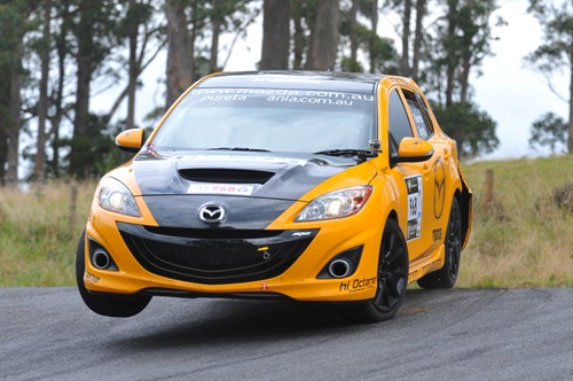 This year from April 5th to April 10th 2011 was the Targa Tasmania rally. If you are not familiar with the event, different classes of cars race on public roads which are closed on the island of Tasmania to see who is fastest. The event spans 5 days of competition so it is an endurance race as well as a test of drivers and navigators. Mazda has been a competitor in the Targa Tasmania for many years, gunning for the top positions. This year Mazda entered several Mazda 3 MPS (Mazdaspeed 3 for North America) in the showroom class and RX-8 SPs in the modern class.

One of the Mazda MPS 3s, driven by Reeves and Smyth finished first in showroom classification and 4th overall. This is an impressive feat considering that there were many cars with more power in the modern classification group (the fastest cars). There were 5 Subaru WRX STIs, several Nissan GTRs of various generations, a Lamborghini Gallardo, Corvette Z06s, and more behind the MPS 3 at the end of the event.
The highest placing RX-8 finished 5th overall in the modern class. They experienced some technical problems and other challenges which kept them from being higher in the standings. 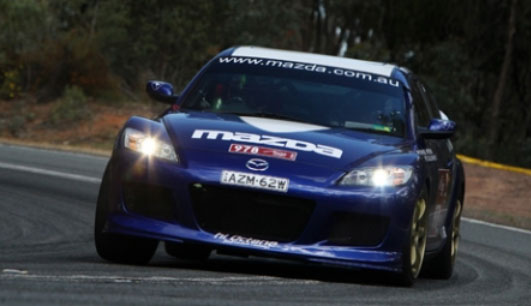 Our good friends at Knightsport in Japan competed in the Macao Grand Prix in the road sport challenge. Knightsport’s team worked hard on the RX-8 to get more power and improve the car in other areas to really be competitive. 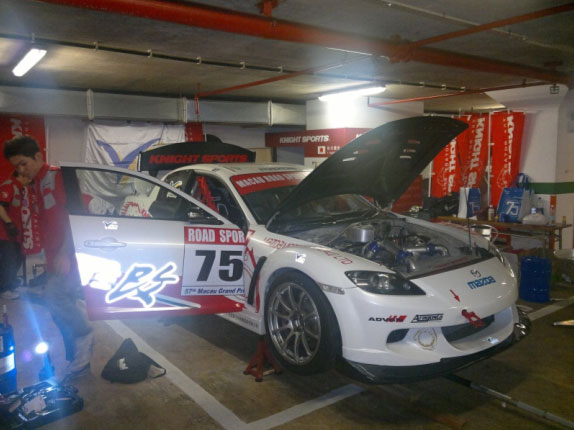 In last year’s event their driver Tanigawa placed 2nd in the race. Unfortunately this year an errant Nissan GTR made contact with the Knighsports RX-8 causing enough damage to take the car out of the race. Yes there is an Rx8 in the middle of the GTR and EVO sandwich in the picture below. 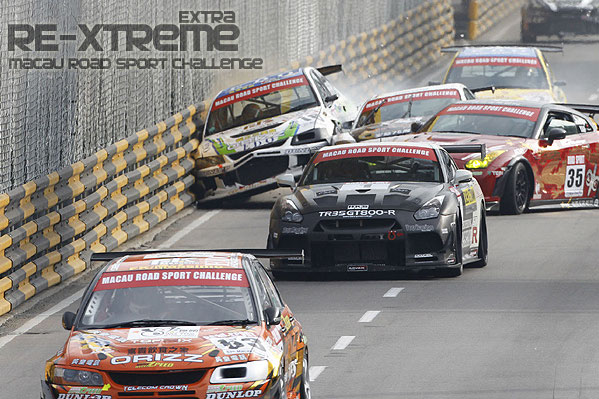 Yau (the GTR driver) said Tanigawa should apologize for the incident and the contact between the two cars. Yau was fined by the racing sanctioning body despite his protests about the fault of the collision. The Nissan driver retired 5 cars with his skillful driving.

Want to see the RX-8 in action? Check out the in car footage shot from the Knightsport RX-8 during qualifying here.

The last team I wanted to show is the Van Herck Mazda 3. Van Herck had been racing a Mazda RX-7 for years and decided to build a new car to compete with in the Belgium Touring Car Championship. They started with a Mazda 3, converted it to rear wheel drive, and powered it with a 450whp 20B and a sequential 6 speed gearbox. 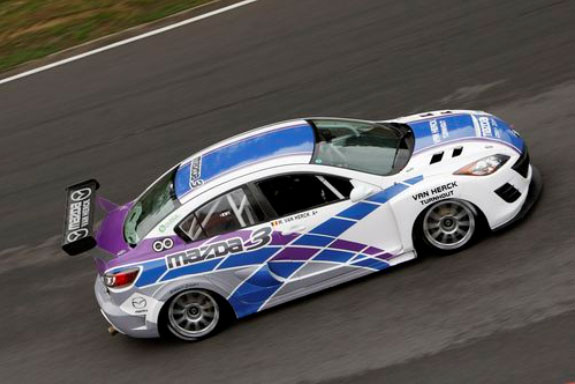 In the first event the Mazda 3 was in position to win when the car stopped on the track for no apparent reason. Back in the pits the problem was chased down to a fuel cooling problem which the team is working to resolve for the next round of racing. After the event all of the other competitors stopped by the pits of Van Herck to check out the car. Most were really surprised at the speed of the Mazda 3. 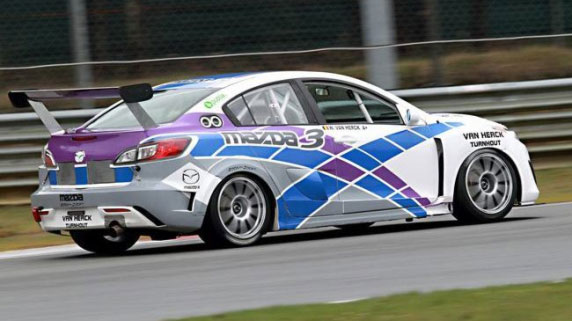 You can see video of the Mazda 3 during some practice sessions here.

I will be re-visiting the progress of the Van Herck Mazda 3 when the season finishes along with some more Mazda racing action again later this year.

Mazdas Racing Around the World May 6th, 2011CorkSport