Today we’ve got a guest blog by a group guys who are die-hard racers. It’s a bit long, but it’s a very interesting read about doing much with very little, and the adventures involved in budget racing. Without further ado, I give you… Team Pony Express!

Team Pony Express is a group of friends who have gotten together to build a crapcan race car. Our steed? A 1991 Ford Escort. But not just any Ford Escort – this is the Pony edition, in which Ford did Colin Chapman proud and “added lightness.” They took out the radio, removed the power steering, and allow all 88 churning hamsters of the 1.9 liter four to do their work on the remaining 2,491 lbs. In short, it’s the GT3 RS of Ford Escorts, but Ford made the very un-Porsche-like decision to charge less for it.

Our particular car was once Aaron’s treasured turbocharged beast, but blew the diff out the side of the transmission housing and the poor Pony was left to collect moss in the yard.

We watched in envy as the rest of the country got to enjoy the crapcantastic 24 Hours of LeMons, and we lamented the fact that the closest they came to us in the Pacific Northwest was the Arse-Freeze-a-Palooza at Thunderhill in California. Then, last Halloween, we saw the light: a new series, the ChumpCar World Series, with more or less the same rules! And they would have TWO races in our neck of the woods! We started putting a team together from the ranks of our Subaru-driving brethren, and began the search for a car. After scouring Craigslist and eBay for a while, we realized an ideal first race-car was right in our back yard. Or more specifically, in Aaron’s back yard, aka the Pony Corral.

Our team consists of Aaron, the Pony Corral Proprietor; Kyle, our crew chief and resident Escort expert; David, the team photographer; Tommy, who’s in charge of our torpedoes when he’s not autocrossing; Ryan, a pro at removing sound-deadening material while everyone else eats and drinks beer; Nate, Destroyer of Clutches; Nick, finder of all things free; and myself, Zach. I’m writing this blog, I guess. 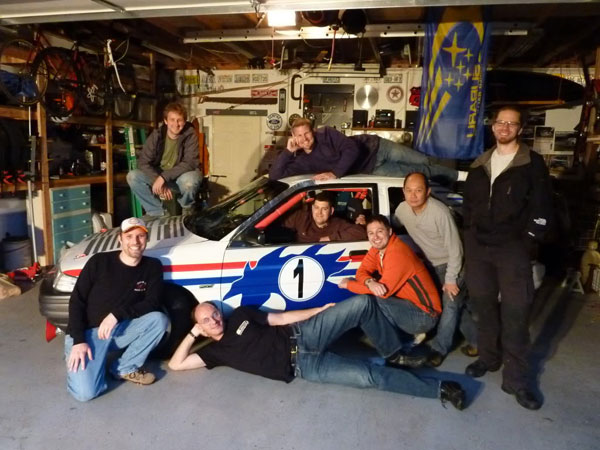 Out of this motley crew, Team Pony Express was born. Our first workdays involved removing the engine and transmission and tearing out all the unnecessary interior bits in the Pony. We unbolted and ripped out seats, dashboard, and interior trim, then attacked the sound-deadening with a hammer and dry ice. It took hours of work, but eventually we transformed a fully functional street car into a gutted, engine-less hulk. 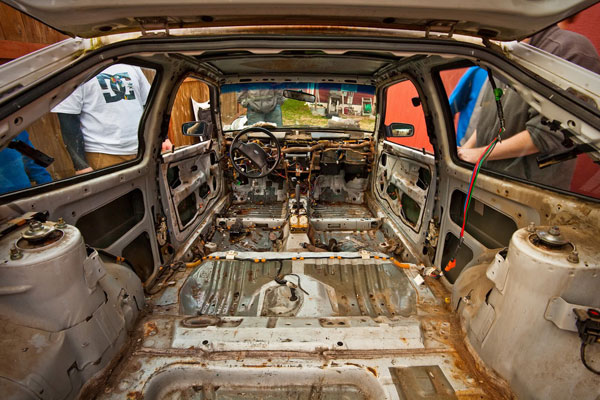 After examining the suspension and brakes, we decided it would be a good idea to get some spare parts. Our Escort experts mentioned that the Escort wagons had larger rear drum brakes, so we sought out a wagon for a parts car. We found a running example in Seattle for $200, and Aaron brought it back to the Corral. We descended on the car like a plague of metal-munching locusts, and removed the front and rear suspension and brakes, as well as the motor. Then we thoroughly vandalized the car and put it on the street for the hulk hauler to take away.

Next order of business was to seam weld the car, install the brakes from the wagon, and install the larger 13.2-gallon Escort GT fuel tank we’d acquired from the junkyard. We had a 2.0L SOHC motor from a 2002 Ford Escort, so we swapped over the accessories from the 1.9L, hooked up the 5-speed, and slid it into the car. We ordered a roll cage and welded it into the car. We relocated the battery to a sealed box in the passenger compartment, and added an extra pair of tail lights in the rear hatch area. Then, we thought, we were ready to start the car.

While all of this work took place we lost our shifter bushings. Knowing that the OEM 20 year old bushings would still be sloppy if we did find them we got in contact with Corksport and got our hands on a set of Bronze Oil Bushings. What a difference! The shifts are much more accurate and smooth. They will also take the abuse that we are going to be giving them at the race track.

We were wrong. The fuel pump whirred, and the starter turned, but the engine never caught, and the garage was filled with the pungent aroma of gasoline. Apparently the heat of welding the cage in had melted the plastic fuel lines! Another junkyard run was in order. We also wanted to upgrade the Pony’s stock headlights to some brighter HIDs, but didn’t want to be the obnoxious guys running HIDs in stock reflector housings. Luckily I had my stock Legacy projector units sitting at home in the garage. They’ll accept an H7 HID retrofit, and we’ll get a much better pattern than the Pony’s reflectors. After JB welding them into place in the Pony housings, we’ve got much better output. 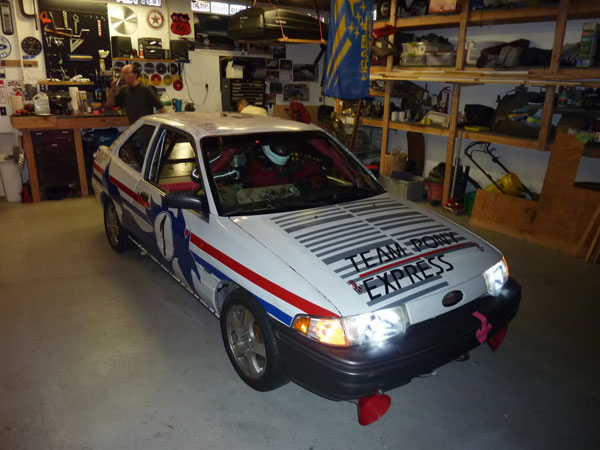 Having upgraded the headlights and installed the new fuel lines, we were set to fire up the Pony. The kill switch and gauges were set, the electrical systems seemed to work, and we turned the ignition. It caught the first time, fired up, and settled into an awesome-sounding lumpy idle. After a few seconds of running, Aaron said, “I’ll try the kill switch!” He flipped it off…and the motor skipped a beat and kept on going. Uh oh. He turned the ignition off, and that killed it. Then we noticed that some of the alternator wiring had melted. The electrical boys were back to work, and thought they had it figured out. The wiring problem, yes. The kill switch, not so much.

Our next workday saw the tires, Dunlop Direzza DZ101s, installed on the car on our gorgeous Acura “Fat Five” wheels ($100 on Craigslist). We’re hoping the DZ101s will hold up well in the cold and potentially wet weather we expect in Portland. We also bled the brakes, worked on some of our secret underbody aero, finished the majority of the wiring, mounted the OEM gauge cluster, installed our custom “cram air” scoop and sheetmetal airbox, and labeled the switches on our beautiful wood control panel. 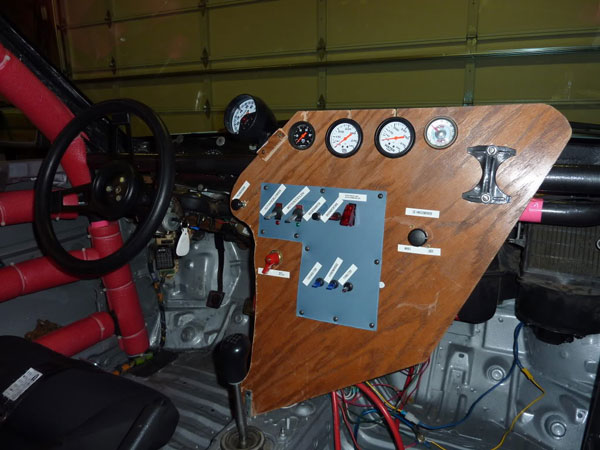 By late September, the car had made a few shakedown runs on the road, and we decided to give it a real challenge. Five of our seven drivers accompanied the Pony to Pacific Grand Prix, just outside Pacific Raceways, for a full day of lapping on the .8 mile outdoor kart track. We shared the track with all kinds of high-performance cars, including a Lamborghini Gallardo and an Ariel Atom, and in total we racked up almost 3 hours of track time. The Pony was a hoot to thrash around PGP, even playfully kicking up a wheel going around some of the corners, though we did a number on the front Dunlops. The only issue with the car was a slow oil leak from the dipstick tube, which we stopped with…paper towels. Hey, it worked for the day!

Through all of this, our steed was looking a bit…bland, clad as she was in her original white. One of our final work days remedied this, as we busted out the rollers and painted on a pair of blue and red racing stripes and some postal barcodes on the hood and the side skirts. We also finished painting the car’s interior, painted our “inner body aero,” replaced a stub axle that had a torn boot, cleaned the MAF and IAT sensors, gapped the spark plugs, fixed the dipstick leak, adjusted a sticky rear brake, added a volt meter, cleaned up the wiring for the instrument panel, and made sure the defroster would run all of the HVAC system’s hot air into the windshield.

Finally, a few weeks later, we had our final workday, where we added our awesome enormous vinyl pony graphics and numbers, retouched some paint, and fashioned some very high-tech funnel-and-dryer vent brake ducts. After we finished work on the car, the drivers suited up in their full race gear and we spent nearly an hour practicing pit stops, with each team member rotating through driving, fueling, holding the extinguisher, windshield washing, and assisting the driver change. We had our stops down to under 3:30, which is perfect since ChumpCar rules require that we stop for 5 minutes if we add fuel to the car.

One last “mini” build day saw the Pony gain some LEDs in the wheel wells; a fresh air tube for the driver; the last bits of vinyl on the roof and hood; cornering lights; and a one-inch raise in ride height (achieved by adding washers to the top of the struts, above the springs), which should improve the suspension geometry. 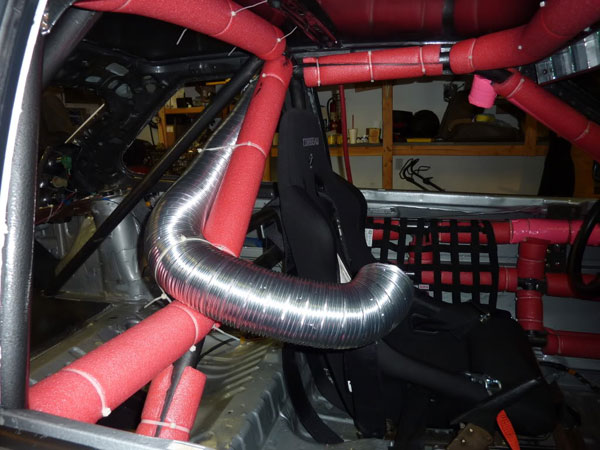 Our big day is only days away, and the ChumpCar field had better watch out – we may not have the fastest car in the field, but we’re sure as hell gunning for the engineering and theme prizes! We’ll be racing for 18 hours in Portland, OR at Portland international Raceway’s 2 mile road course.