We recently added a new part to our webpage, the Xcorder. I had a chance to drive around with one for a few weeks getting more familiar with the unit.

The primary feature is the video capture. The camera is always running on the unit and the videos get saved in 1 minute chunks in an MP4 format. The wide angle lens does a really good job of showing everything in front of recorder. You can see the complete windshield the Xcorder’s entire view.

I got a chance to test out the load sensor in the Xcorder doing product testing. I took the Xcorder out for a spin in the Mazda 2 with a new rear bar to get an idea of how many g’s I could pull around a roundy-round intersection. In the video below you can see the path I was taking and the g-load spikes. I came close to pulling 1 g around the turn which is shown just under the video screen (the spikes on the x-axis). You also get a good look at where I was doing said suspension testing in Vancouver with the GPS location. After recording the video I noticed that I slowed down going around the corner. I did not want to slow down; my sub-conscience took over while driving. This will give me something to check while competing in the next auto-x. If I can correct a throttle lift at points on the course where I need to be on the throttle it can result in quicker times.

If you really want to amuse yourself with the Xcorder turn it around backwards so you can see the expressions of the drivers and passengers. You would get a wide angle view of everyone and their faces while driving. (check out those white knuckles on Jake) 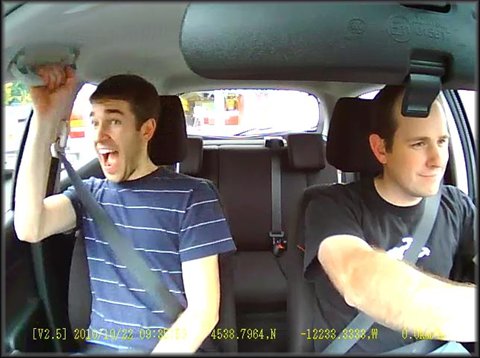 If you have kids it also gives you a great deterrent against the sibling “she said he said” conflicts that can occur in the back seats.

Getting the videos off the unit is really a snap. The SD memory card pops out of the side which is super handy. The video and picture above, I pulled off the SD card on my laptop in a few minutes.

Is it worth the $199? You bet it is. The little bit of data- logging information I gains from looking at my driving in the corner testing out the g loads is something I had no idea I was doing. That little piece of information is worth it in competition events. The extra insurance the Xcorder offers makes an incredible value. Having a constantly running video recording can be invaluable. I hope I never have to pull a video off of the unit to prove who caused a traffic accident.

2 Replies to “Introducing the XCorder (More Like XTREME-Corder, Am I Right?!)”